Last Monday we were invited to DJ at the IF Awards nominations party at Quay restaurant in Sydney’s Circular Quay. The night started with us getting our make up done at Quay West Suites by MAC (our favourite) and hair did by GHD. We even managed to get a free GHD and MAC lip gloss and we hadn’t even played yet! The night only got better once we got to the event.

The night was a who’s who of Australian TV and film stars including, Pheobe Tonkin from Tomorrow When The War Began, Angus Sampson from Thank God You’re Here, Underbelly’s Cleo Bachelor Firass Dirani and Special Ops star Katherine Hicks. We were over the moon because we got to play rnb and hip hop for the first time in weeks which was a welcomed break from the heavy metal we have been playing on the Crusty tour. We have to give a special mention to the canapes which were exceptional. Thanks to Annie Stags for booking us for this one! Check out a little mention we got in Ok! magazine post event. 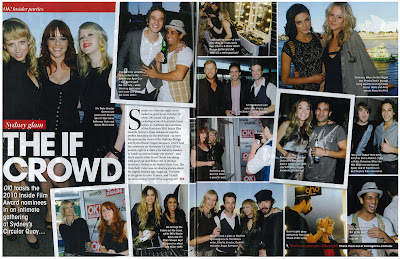