Just after being released from a psychiatric ward after pleading mental incompetency for violating his parole during an altercation in in November of 2010, Gucci Mane has surfaced with a new tattoo of an ice cream cone with 3 scoops on his FACE! He may be crazy but we still love his music 🙂 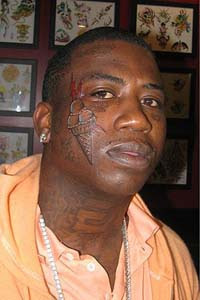